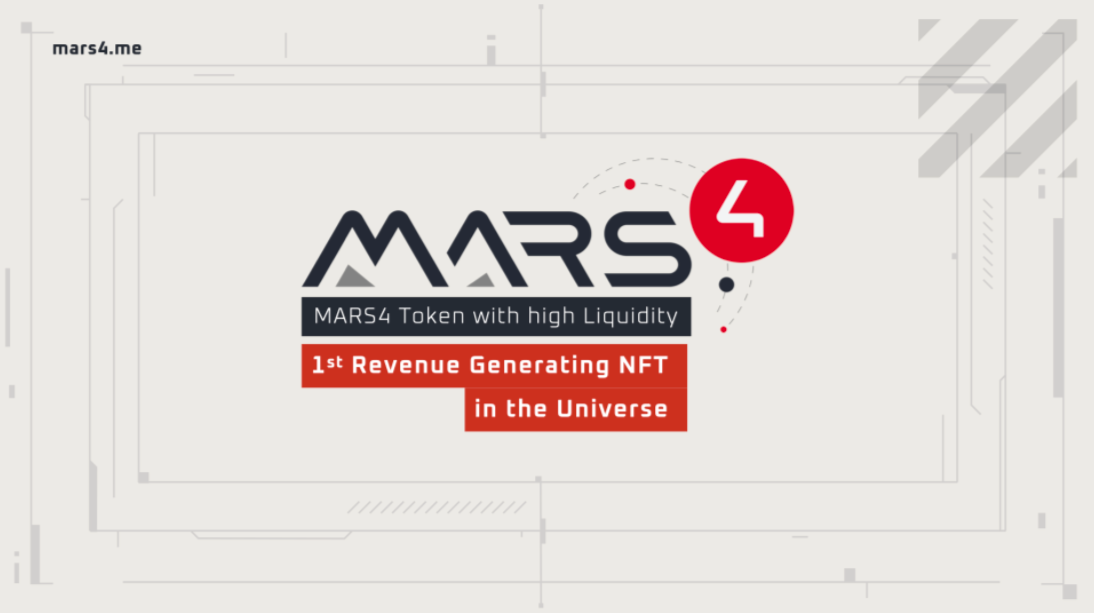 The red planet is a mystery to man and his obsession with it has created many legends and myths over the centuries.

As the US’s Perseverance rover lands on Mars and drills its first Martian rock core for NASA, interest in Mars is at an all-time high, and pioneers are dying to stake their claim on the Red Planet’s soils.

A meaningful approach for the visionary is to speculate on Mars’s value. You can do this by participating in the Mars4 non-fungible token (NFT) and land plot sale running on Ethereum.

Mars4 is a Metaverse ecosystem where you can explore a geographically exact virtual Mars, own and customize your land with MARS4 dollars and even reap the rewards of the world’s first revenue-generating NFT. The Attractive tokenomics of Mars4 leverages NFT Mars Land, Gamification and Token Redistribution.

Mars4 is a unique metaverse. The Mars4 project’s development team has modeled their detailed 3D map of Mars’ terrain based on the latest data from Mars and other space agencies. Think of it as Mars’ equivalent of the 2001 Google Earth 3D map.

How does Mars4 work?

Inside its metaverse are diverse adventures and fun activities that will keep its community-engaged as they generate passive income from its NFTs. The Mars 4 project has three fundamental elements.

Its 3D virtual world is Mars4’s gamification aspect. Through it, you can explore Mars and buy land as NFTs. These NFTs will earn yield via the project’s liquidity mining feature. Mars4 has 99,888 unique and rare Real Estate NFTs that symbolize Mars’ rovers landing sites and its most popular geographical features.

Each land parcel measures 559 square miles. On purchase, terraform your land to increase its value. You can purchase additional value-enhancing avatars, certificates, and logos from its in-game assets feature.

You can buy Mars4 land parcels with MARS4 tokens at its public sale. There are 4 billion MARS4 tokens that are used to mint the platform’s 99,888 NFTs. Already more than 50% NFTs are sold.

MARS4 tokens will play a key role in the metaverse’s transaction processes. Each time users perform a transaction, the Mars4 NFT holders will earn a yield. The project’s protocols will reward NFT owners for holding their units.

Before the launch of Metaverse, epochs were introduced to redistribute passive income for Mars landlords. The scarcity model was designed to provide a yield for NFT owners as soon as possible, as there are no transactions until the game is launched. After TGE event, MARS4 dollars will be integrated and extremely high transaction volume is expected.

Each Epoch starts after a new batch of 10,000 NFTs are sold. 51% of income from the Land NFTs are redistributed to the previous NFT owners, starting in Epoch 1. As more than 50,000 NFTs were sold already, Mars4 entered the first epoch on September 24th 2021.

Moreover, the scarcity model means the price of the Mars Land NFTs increases as supply decreases, making it a win-win situation for existing land holders to attract new participants to the economy to increase the capital appreciation of their NFT land holdings and reach the next Epoch sooner.

NFT holder incentives will grow after each epoch and even more later as the metaverse’s transactions increase. Mars4 NFTs are therefore an excellent long-term investment prospect and are available on the Mars4 Ecommerce site.

MARS4 tokens were listed on Sushiswap’s MISO launchpad from September 15th to 24th. In the private and public auctions for MARS4 tokens the minimum raise was collected in the first 45 minutes!

In the format of batch auction, participants contribute to the pool. A set number of tokens are then divided amongst all the contributors to the Market event, weighted according to their contribution to the pool.

Two auctions were organised with a total of 40 million MARS4 tokens. Mars4 exploded on the MISO launchpad with a 13 times larger amount raised than the minimum raise.

MARS4 tokens are now listed on Sushiswap and staking is available via their ONSEN system. More information is available live on Mars4 Telegram and Twitter accounts.

The demand for Mars-related NFTs will rise as more exploration reveals Mars’s mastery. Mars4 NFTs are a rare combination of the NFT benefits of proof of ownership of something both scarce and beautiful, and passive income generation.

Unlike other NFT projects, Mars4 has revenue assurance from its NFT yield generating protocols. It is therefore not just an artistic and exploration medium for content creators, individuals, and businesses, but an excellent source of passive income.