ULAND is our world remade. 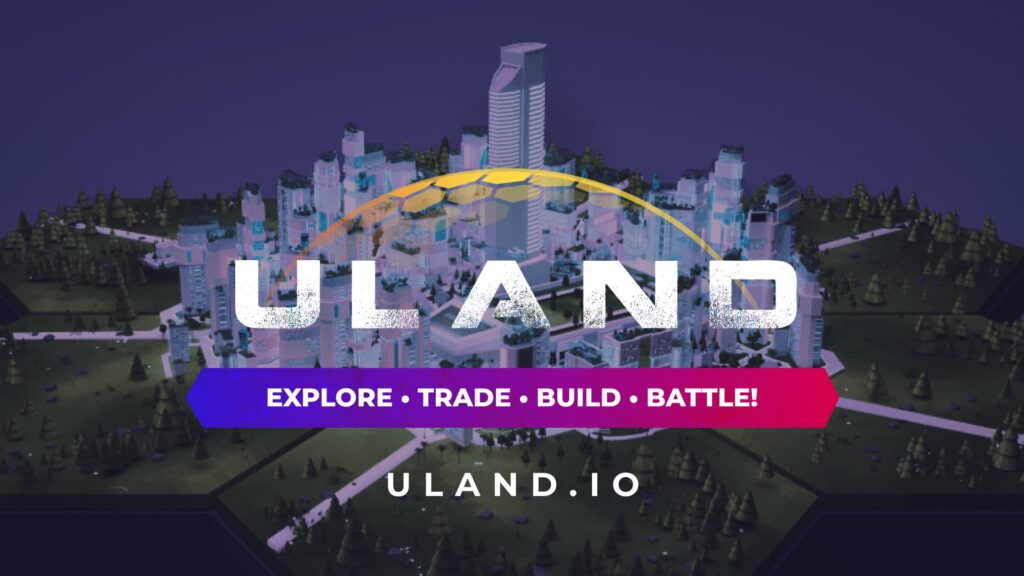 In this Battle & Build, Play & Earn, real-time PvP strategy game, this new virtual world is mapped against our real one: full of Countries, Regions/States, and Plots of Land that players can Collect, Explore, Develop and Battle for control of against thousands of other players from around the world!

Built using blockchain technology, ULAND is leveraging the best of NFT’s, Gaming and Web3 to bring you a gaming experience unlike any other.

Expand your empire by collecting and developing your own VIRTUAL LAND on this immersive, globally scaled game board. Divided into thousands of Hex Plots, players will be able to Mine & Harvest for valuable in-game Resources (such as Gold, Stone, Wood & Diamond) and trade them at the Marketplace.

Trade, build, and earn in-game rewards within our economy based around our two in-game tokens: $ULAND & $XPLR. ULAND has created an insulated, organic, and exciting empire-building strategy game where ULANDERS (that’s you!) can remake our world from the ground up.

Powering up Web3 gaming via the BNB Chain and the Ethereum Network, all ULAND Land Assets are collectable and tradeable NFT’s with real in-game utilities, underpinned by our two tokens: $ULAND and $XPLR. Each with its unique tokenomics to create an organic and insulated economy within ULAND’s ecosystem where you can play and earn. Welcome to ULAND! Let’s build the future together.

What is your business and what are you doing? Tell us your story and how you’ve started, what made you choose this path.

ULAND began as a dream shared by two creators, 57 pixels and flume. As the interest in crypto & NFTs has grown in recent years, these two friends thought there was room for a grander vision that would fuse Blockchain, NFTs and compelling concepts of strategy games beloved by millions. Their idea was simple:

What if you could COLLECT and OWN your very own ‘virtual’ countries based on the real world?

Well, the ULAND team has mapped our Real World into this new metaverse. Unlike NFTs in the current digital art space, ULAND NFTs are geographic assets that can be interacted with in the game, from countries to states, cities & factories, and even famous wonders like the Eiffel Tower and Chichen Itza!

Civilization itself becomes a playground for our ULANDERS, as they both work together & battle to create an insulated in-game economy freed from the government & financial institutions of the real world. It’s a chance for our players to remake the world, through in-game land acquisition, resource management and an addictive Battle System, which rewards players with a place in a new type of in-game economy.

From there it snowballed!

What makes you stand out within your industry? Why are you unique?

– Mapping the real world into NFT’s.

– Pushing the tech boundaries of what’s possible with Web3 such as dynamic NFT’s, In-game rewards and Cross Chain compatibility.

How did you make a name for yourself or your company in your industry, especially in the early days?

– Having a unique Web3 Gaming project with a big vision.

– Being loyal, transparent and acting with integrity with our community.

– In touch with our members, and responding promptly to community feedback. – Great user experience and pushing tech boundaries from the start.

– Generous rewards for our early adopters

– During our Pre-launch phase within a space of 3 weeks all of our Land NFT’s Sold Out. This was done over 3 Land Release Waves. Wave 1 sold out in 48hours; Wave 2 in under 30min and Wave 3 in under 10min.

– At the same time we launched our $ULAND token and hit a $30 million market cap. – When we officially launched over 72 Million in $ULAND tokens were rewarded to our Landholders due to our tokenomics.

– During our official launch Month in December 2021 we were featured in both CMC and CG in their top 10 gainers consistently and tracked over $1million in daily token trading volume.

– During the bear market we didn’t touch any of our token liquidity and kept developing the project.

– Our Discord and Twitter members have remained steady during the crypto winter of 2022.

What were the biggest challenges you have faced and how did you overcome them? What keeps you running when times get tough?

– Trying to develop fast enough to keep up with demand whilst still building a quality project.

– Building through the Bear Market and Crypto Winter of 2022 when so many other projects went under, rug pulls and overall negative sentiment of crypto.

There two main reasons we continued to forge on with ULAND:

1) Our loyal and hardcore group of followers. We’ve gotten to know some of them quite well and the positive feedback we’ve received from them inspires us to continue on. Their love for ULAND gives us the fortitude to overcome these challenges.

2) Staying true to our vision: To create an awesome game that WE want to play and hopefully others will enjoy playing as well.

What piece of advice do you wish someone had given you at the start of your career?

People will remember how you made them feel, long after they’ve forgotten what you’ve done for them.

Where do you see yourself and your product in a couple of years? What are some of your dreams and aspirations?

– Vibrant community of players who are having fun, making friends, learning about different cultures and languages, competing and creating communities within ULAND.

– Very detailed and fleshed out ULAND where players are interacting on a real Micro level within our MetaVerse, such as Landmarks (Eiffel Tower, Great Wall of China, Pyramids), Airports & Harbours and so much more.

What is happening in ULAND right now?

– Game Pass – Owning a Uland Hero will give players access to explore their T3 hex land for natural resources as well as battle other players to earn rewards.

– In-game Avatar – Each hero will have a 3D character portrait in an Avatar frame on your screen and many other places when interacting with the game.

– Staking – Players can stake their heroes prior to the game’s release so they can start earning in-game rewards such as loot boxes and NFTs.

– Unique Art & Rarities – Each NFT will feature unique rarities, art, will be split into three types; Male, Female and Robot. Each NFT can also have swappable clothing or designers giving players the opportunity to upgrade and customize their own characters.

– Players can stake their heroes prior to the game’s release so they can start earning ingame rewards such as loot boxes and NFTs.